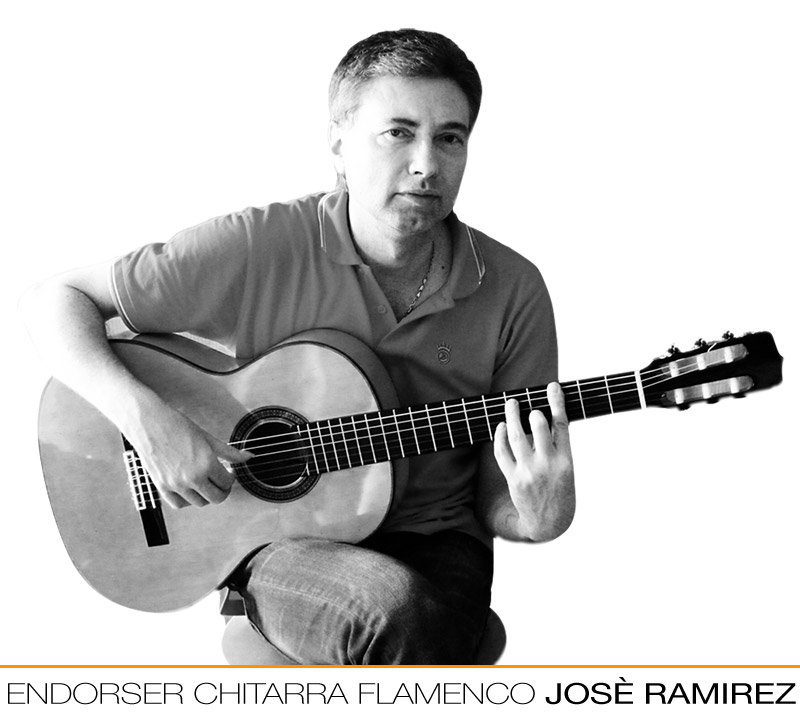 Roberto Riva,a guitarist of world-wide renown, has got a big , concert, teaching and record activity.

He was born in Erba, near Como and he has been studying guitar since he was young, developing a natural aptitude that allowed him to embark on a brillant career. His musical qualification ranges from the classical fields to the guitar study in different styles and techniques, that they allowed him to get a complete knowledge of the instrument.

Guitarist, composer and expert in flamenco, he specialize in flamenco in Spain. This love has been handed down by his father, who gave him many redcords of an excellent guitarist in flamenco, like Carlos Montoya (unique is the destine that link the natural father and the artistic one, both of them dyed on 1983). Then he listened toPaco De Lucia and he was attracted by his style. He spent a lat of time trying to learn the pieces of the Andalusian guitarist from his records, understandyng the secrets of his sensational virtuosity. This way will be important for his musical guitar training and his will enable him to build a personal technique.

Later, in Spain, he studied in depth his knowledges about flamenco, studying with two famous exponents and leaders of this school Paco Peña and Manolo Sanlucar,from them he received an important education, but also approvals and incitements.In Spain he attended an authentic and professional environment of flamenco-guitar, of "cante" and of dancing. Then he knew and met Paco De Lucia a lot of times. In Cordoba he attended Sabicas, who is a legend in the history of the flamenco-guitar. In Spain he frequent the most famous luthier's environment.

In this field he concentrated his efforts and he got several rewards and important reviews. Critics have often pointed out his being the first italian musician who has ever spread flamenco by means of both his concerts (his activity started in the late 1970's) and his didactic and recording activites.

At the beginning he was greeted with surprise, then immediately he had a lot of approvals by public and crities. He has made successful exibitions in several concerts both in Italy and abroad , working with important concert associations, playing both like a soloits and whit his group ("Grupo Flamenco Rivas") in theatres, auditorium, universities, cultural events, music reviews, festivals, on radio and on television (RAI, national and private stations) where he proposed traditional flamenco on oneside and, on the other, presented himself as a composer. Crities expressed unanimons approvals and praises on his interpretative qualities:"Roberto Riva doesn't show only a big instrumental technique, but he has entered fully in this kind of music. His passages represent a wonderful example of artistic-musical expressiveness" (Mestiere Musica)

He was the artistic director and guitar soloist of the"Grupo Flamenco Rivas". Several artists coming from Spain and Italy played in the "Grupo Flamenco Rivas" . A not yet know flamenco artists had played also in this group. So, they had the opportunity to have a significative experience. Such artists, after this experience, pursued a proper artistic project, and they contributed to spread the flamenco in Italy.

In the tv field he has recorded for several national and private stations: one is the national spanish tv he co-operates with for programmes dedicated to flamenco guitar and the RAI (Italian National TV) for which he played "Concerto di Chitarra Flamenco" in 1987.

Specialized music magazines have given him important reviews during these years. He has often been the first in national classifications and has been one of the first in international ones. In 1992 he was the second in the referendum "The best flamenco guitarists", 1st classified Paco De Lucia, 3rd the group Gipsy Kings (Chitarre). The latest classification has confirmed him like "the best italian flamenco guitarist" (Chitarre).

Merit quotations have been published on school-text by Mondadori (Filarmonia - The history and the musical instrument).

In the recording field he has recorded for DUCALE "Noche Flamenca" (the first collection of toques flamencos composed by an italian artist) and "Flamenco- Chico Calun" which are both on the international market.The works have been received well, both for the high artistic value and for the partitcular sonorities of flamenco.

In the didactic field he is the author of the cd method "Para tocar flamenco" (CURCI) ,of the video "La chitarra flamenco" (PLAYGAME MUSIC) and of the method with cd support "Aficionados" (TOP MUSIC CENTER), appreciated in the guitarist field.

Since 1989 he has been co-operating with the magazine "Guitar Club" where he has storted the first italian review dedicated to "flamenco guitar" whit several issues concerning different subjects, from the toques to guitar tecniques, transcriptions, didactic works, historial references.

It's also important to mention the "flamenco guitar courses" he has held at the "European Academy of Music" in Como and "The Music Didactic Institute" in Milan.Following these course and a private lessons some pupils followed the professional career.

Finally it's important to emphasize his social commitment in order to helps several humanitarian associations with charitable concerts. They have always been typical of Roberto Riva's personality, sensitive to people's poverty.

Nowadays he carries out a concert activity, mainly like a soloist and he presents a style of classical and modern flamenco.

Roberto Riva is the "endorser" in Italy of the guitar "Flamenco Gran Concerto Josè Ramirez" of Madrid.